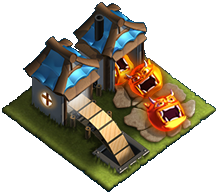 "The Ammo Depot creates Ammo for your Ships to fire in battle!"

The Ammo Depot is used to create Shots that you can fire out of your Ship 's Cannons when you attack. As you upgrade the Ammo Depot, new Shots become available for construction.

Beast Shot is also an Ammo Shot which can be produce at Training Ground. Beast Shot can damage other units but it has more(15 times) damage to Beasts. It is available to any level of Training Ground and it can be obtain and upgrade at Reward Shop using tokens.

When you create a Shot at the Ammo Depot, it is added to the Ammo Capacity of your Ships' cargo. It does not take up any Troop Capacity. You start with a base 2 Ammo slots. Each type of Shot has its own special features. See their own Wiki pages for details. You fire Shots during battle the same way that you would deploy troops, except that Shots are not restricted to deployment boundaries.

Retrieved from "https://ninja-kingdom.fandom.com/wiki/Ammo_Depot?oldid=6547"
Community content is available under CC-BY-SA unless otherwise noted.