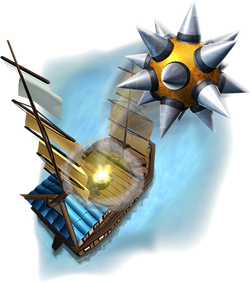 "Launched from Ships, the Beast Shot is an accurate, powerful projectile that does more damage to beast than other units."

Once was the prize of the Beast Showdown event, the Beast Shot is now one of the event rewards which can be bought with tokens.

A Beast Shot afflicts 15 times of damage to a beast thus even a basic Beast Shot (lvl1) can afflict damage slightly more than a Big Shot lvl 5. However, despite what stated by the in-game description, the Beast Shot has had a reputation of inaccuracy until 2014-11-11. [1]

Retrieved from "https://ninja-kingdom.fandom.com/wiki/Beast_Shot?oldid=7193"
Community content is available under CC-BY-SA unless otherwise noted.