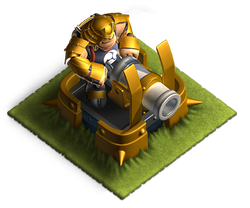 The Dragon Cannon is the 1st defensive weapon available to your Kingdom. It has a steady rate of fire with medium damage. It can target only one enemy unit at a time. It has a medium range, and it attacks Ground Troops only.

If a defending Oni attacks enemy Troops with his special Jump attack, and lands correctly next to a Dragon Cannon, the top of the Cannon may be displaced (because the Jump attack has a knock back attribute). When this occurs, the Dragon Cannon is not damaged, but the top portion will continue to swivel and attack even though it does not appear to be attacked to the base. This sprite also takes up space like a normal Troop, thus, other Troops will spread out around it, leaving it in it's own area (since sprites can move through each other, but not stop occupying the same space). This results in mobs of Troops attacking the base of the Dragon Cannon, but not filling in the space where the top portion is occupying. If the base is destroyed, the top portion will explode as well. The Dragon Cannon acts in all other aspects the same.

Retrieved from "https://ninja-kingdom.fandom.com/wiki/Dragon_Cannon?oldid=8167"
Community content is available under CC-BY-SA unless otherwise noted.