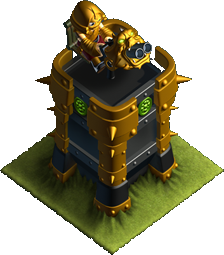 "Possessing greater range than the Dragon Cannon, the Kunai Tower can target ground and flying enemies."

The Kunai Tower is the second defensive weapon you can place in your Kingdom. It has a Range of 0-11, allowing it to shoot 1 space further than the basic Dragon Cannon . It fires slightly faster, but deals less damage giving it a slightly lower Damage Per Second than the Dragon Cannon allowing it to deal. It can also attack Air and Ground Units.

Retrieved from "https://ninja-kingdom.fandom.com/wiki/Kunai_Tower?oldid=7757"
Community content is available under CC-BY-SA unless otherwise noted.