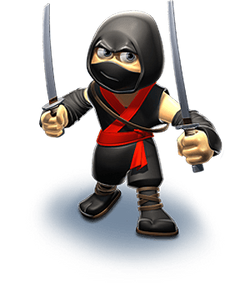 "Masters of stealth, Ninjas seek out enemy defenses, scaling walls and remaining hidden until they attack or trigger a trap."

The ninja has two abilities: The first one is when it gets spawned it has the ability to hide making it undetectable by defenses and traps. The second one is the ability to jump over a wall, but can use it only once and it can jump over only one wall. If there is a wall after the first one or if there are two or more walls behind each other than the ninja will either attack the wall, change its path to the target, or proceed to another target instead. Both abilities however will be lost after the ninja launches its first attack.

Resistance: Ninjas trained in Resistance use their willpower to overcome stun and freezing effects.

The ninja is one of the fastest troops that can currently be used. It also has defensive building priority.

Retrieved from "https://ninja-kingdom.fandom.com/wiki/Ninja?oldid=8243"
Community content is available under CC-BY-SA unless otherwise noted.