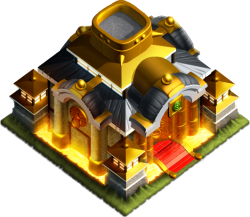 "Upgrade to unlock new buildings. At level 3 the Palace is defended by the Princess!"

The Palace is the center of your palace and residence to the Princess. It serves as a shelter for your citizens during an attack and storage for a small amount of resources. Upgrading the Palace gives you access to more buildings and upgrades to existing buildings.

After defeating the 16th outpost of the campaign "The Badlands", and the tower holding the princess is destroyed, the princess becomes a normal citizen of the player's kingdom. From palace level 3 ,the princess guards the surroundings of the palace and lobs a purple magical orb at enemy troops, which does medium splash damage.

When you upgrade the Palace to Level 3, the Princess will take shelter in the Palace during an attack and climb to the roof. From there, she will occasionally fire blasts of purple magic at enemies that come within a certain range of the Palace. These blasts deal a medium amount of splash damage around where they are centered. You cannot control where the Princess fires. She tends to target the closest opponent to the palace. She does not target Troops that are directly next to the Palace.

Once you have created the Ninja Tech there is a chance that when the Palace is destroyed, you will recieve a Surviving Ninja Bomb which will then proceed to blow up your opponent's troops.

The Palace is your main building. If it is destroyed, your opponent gains an automatic star, and a victory. This can prevented by keeping your palace in the center of your Kingdom, or in other places that the opponents cannot reach.

You can also put your Palace in an easily accessible place to gain a 12 hour shield once it has been destroyed.

In addition attacking a lower palace level results in gold/sushi penalty in addition to earn less runes in the rune event. You may earn negative runes if the palace your attacking is a greater difference than 3 or 4 depending on event statue level.

although it unlocks new buildings, access to higher level buildings. It also ramps up the difficulty and time in this game convincing players to reach higher trophies to fight with the same level as well as spending more resources to upgrade/create buildings

Matchmaking is DEPENDENT to trophies not higher palace levels.

Retrieved from "https://ninja-kingdom.fandom.com/wiki/Palace?oldid=8239"
Community content is available under CC-BY-SA unless otherwise noted.